Showing posts from August, 2010
Show all

The politics of the floating gay 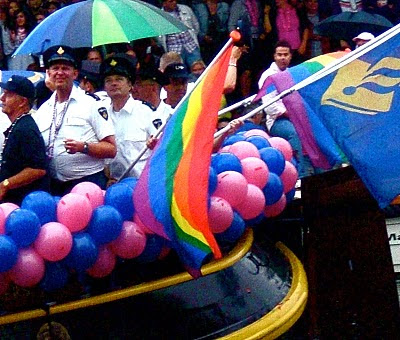 The floating gay parade, 80 boats with specific themes sailed along the Prinsengracht/ Amstel river canal with Lady Gaga ruling the airwaves. Cher managed to seep in a little but gone are the days of Madonna and Barbara Streisand. While no doubt an enjoyable spectator sport, there were some troubling trends. For instance, the energy on the boats lay low (my benchmark = NYC and San Francisco gay pride parades). You start to think about the relationship between the parade participants or “actors” and the crowd or the “audience.” Usually, in such parades, the line between the spectator and the spectacle is blurred, with the run of the mill you and I dressing up with stringy pink wigs, rainbow socks, to sometimes a full blown, out-of-the-closet costume. And you cheer...like your life depended on it. Your vocal cords compete with the likes of a newborn baby. Yet, at the Amsterdam parade, there was a sober quality where the audience barely even cheered, let alone waved at the floats t
Post a Comment
Read more

Culture on the go: the New Yorker's Subway 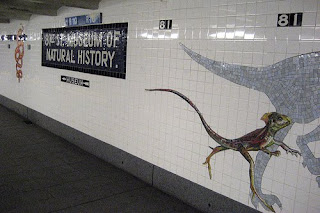 Commuting can be a drag, even more so in a densely populated city like Manhattan . I’ve done the uptown-downtown journey for years where you learn to block ungainly sights, smells and sounds on the subway. It’s a talent onto itself really. Jammed with the loudly enthusiastic tourists, the drunk and the homeless, and the emaciated college kids heading to east village, you develop a protective force field that usually is a potent combination of your iPod, the Economist and shades. That said, it is astonishing that the Metropol itan Transit Authority (MTA) takes this reality and turns it to its advantage. Understanding that New Yorkers are constantly on the move, it capitalizes on this and makes this commute a cultural experience. And we do stop and notice. While there is comfort in standardization through the quintessential subway blue and white tiles, there is also difference. Difference that reflects specific neighborhood stops. So if you get off the Natural history museum , that’s
Post a Comment
Read more
More posts