Showing posts from July, 2016
Show all

4 conferences, 3 cities, 2 countries: Nice wrap up for a sabbatical 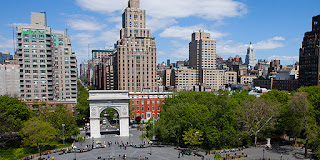 The month of June served as a nice wrap up of my almost yearlong sabbatical that started in New York and ended in Germany. Four conferences, three cities and two countries (Japan and China) – indeed was a true roller-coaster ride. The end of this sabbatical is reminiscent of my start where I launched it as a NYU Steinhardt Fellow in New York, my old stomping grounds where I spent ten years of my life, including my doctoral days of trying to get in as much New York at the price of as little sleep as possible. Nobody warns you on the work that goes into organizing a sabbatical and the psychology of dislocation that comes with it, both liberating and disorienting at the same time. Giving up your home, moving to different countries, being confronted with a long to-do list of writing on a daily basis mixed with the classic promise of finding yourself on a beach somewhere sipping pina coladas. Well, the latter did not happen but instead of beaches, I managed to escape regularly
Post a Comment
Read more
More posts