Showing posts with the label Columbia University
Show all 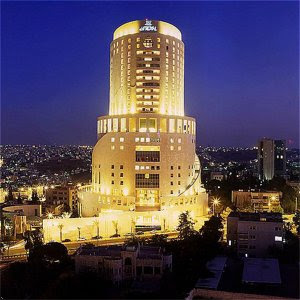 It’s like a James Bond film really: indoor palm trees, high ceilings, limestone walls, sheiks in long white robes helping themselves to a luxurious breakfast buffet at the Le Royal hotel; the chatty cab driver who tells me that he has friends everywhere and a Maltese girlfriend waiting for him at home. Military men with guns (well, not flowers obviously), guarding precious property…hang on, the property is the American University! Nothing invites students so enticingly as the nozzle of the gun. The only deviation from this sexy storyline is that we are here for a higher education reform conference. From exciting thriller to drama (or documentary perhaps), the term “education” has a way of sobering this momentum. This is a collaboration between Columbia Middle East Research Center and the Jordanian government. Columbia University, much like several universities in the US, is eager to gain an academic foothold in the Middle East and capture a new consumer base of young doe-eyed student…
Post a Comment
Read more
More posts