Showing posts with the label Gerardus 't Hooft
Show all

TEDx starts with a Boom... 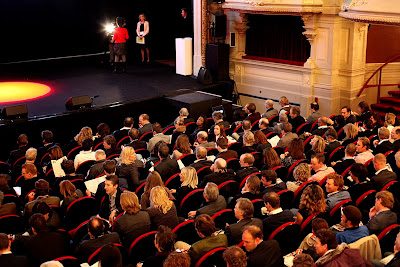 Jon Rosenfeld from Boom Chicago, an Amsterdam comedy institution known for its live shows and video productions is hosting TEDx Amsterdam today. He starts for sure with a bang, a boom and happily no bust, cracking up the audience with his witty oneliners such as, "we're all TEDheads here. We're the nerds from high school that made it!" or "we're the Economist readers ...we have that secret nudge, that all knowing wink of getting off on an orgy of ideas" and more, paving way for Prof. dr. Gerardus 't Hooft, the Nobel Prize winner in Physics. Now thats a hard act to follow! In fact, I believe usually scientists do not usually follow comedians when launching into their talks on how nuclear energy transforms the world. So well, kudos to him as he slowly works his way to engaging us with his facetious warning that, "blackholes are not safe to be close to...it can be dangerous!" While starting with the cliche of beam me up Scotty which is oh wel…
Post a Comment
Read more
More posts