Showing posts with the label Dutch cartoons
Show all

Fokke n Sukke does a number on us Tedhead bloggers 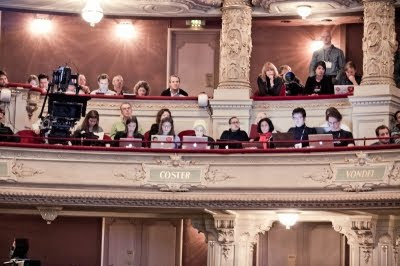 Granted, my profound ignorance of Dutch cartoons mitigated a little only due to self-centrism. Having learnt that us TEDx bloggers from the TEDx Amsterdam event (that recently wrapped up on Nov 30th) was covered by two specimens that don't wear pants, it piqued my attention for sure. Fokke, a run-of-the-mill duck wearing a small sailor's cap is accompanied by Sukke, a canary bird that wears a baseball cap backwards but apparently rocks the boat with their supposed tails that coincidently resemble male genitalia. But thats not all that they rock. Their benign disguise is coupled with politically incorrect humor and barbed sarcasms targeted at posers such as us TEDheadders, a subculture of The Economist reading, Mac hugging, Jon Stewart loving type of groupies.

So, Fokke & Sukke is a Dutch comic strip created by writer and illustrator Jean-Marc van Tol, and writers John Reid and Bastiaan Geleijnse and is published in the daily broadsheet NRC Handelsblad. These guys even won t…
Post a Comment
Read more
More posts