Showing posts with the label indian politics
Show all 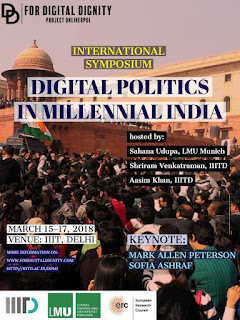 What a packed but exciting month. Just came back from New Delhi after a stimulating workshop with a group of interdisciplinary scholars and activists at the IIIT Delhi campus. This international Symposium on Digital Politics in Millennial India is part of a larger project on politics in digital India by Sahana Udupa at the Ludwig-Maximilians-Universität München . Here, I spoke about the impact of datafication and bots in the political life of low-income communities in India. While these talks were going on, the prestigious  Jawaharlal Nehru University staff and students were on strike due to policies from the government that was infringing on their academic autonomy. There were also a number of scholars from the United Kingdom who were also in the midst of the largest academic strike over pensions and the growing privatization and commodification of education. This was a humble reminder about how knowledge is deeply political and how we need to continuously struggle to keep it pr
Post a Comment
Read more
More posts